During World War II, the art market experienced a massive boom in occupied countries. Its discretion, the inflation-proof character, the absence of market interventions and the possibility to resell artworks abroad, have been named as the reasons to explain why investing in artworks was, and has continued to be one of the most interesting and lasting opportunities.[1]

As a concrete example, the sales between 1942 and 1945 of the main French auction house Drouot were analyzed in a recent study by Kim Oosterlinck. By examining the 24,500 paintings offered in this period, Oosterlinck created an index from the repeated sales, finding that the average price of canvasses increased by 114% in just one year. 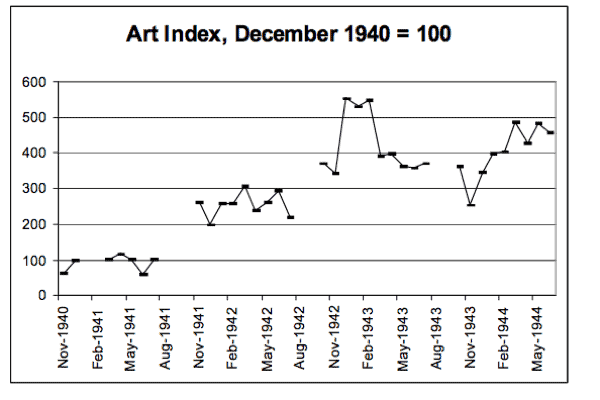 During the first part of the occupation (from December 1940 to June 1941). The index remains stable (if one excludes the sharp rise from November 1940 to December 1940, which may just represent the market going back to normality). Prices increase sharply when auctions resume in the fall of 1941, the index remaining between 200 and 300. The massive increase in price does not happen before November 1942. It peaks at 552 in December 1942 and remains almost at the same value up until February 1943. This period is followed by a decline with the index reaching a low of 253 in November 1943. At that date, the index resumes its rising trend to end in June 1944 at 455.

The graph presents the evolution of 6 indices representing 6 investment opportunities among which three were traded on legal markets: Art, Equity, State Bonds, and three on the black market: Gold (Napoleon coin), Gold (index made of the price evolution of the Napoleon coin, the Sovereign coin and the Gold-dollar) and foreign currencies (an index made on basis of the price evolution of the GBP, USD and CHF notes). The comparison starts in March 1941. Before that date the Paris stock exchange was not allowed to trade equity. [2]

When comparing this art index with other sources of investment (equity, bonds, as well as gold and foreign currencies traded on the black market) it shows that, from March 1941 until the liberation of Paris, the returns in the art market were higher than in any other market.

OTHER COUNTRIES FEATURING THE SAME RESPONSE OF THE ART MARKET

The situation in occupied France was no exception as the price patterns observed there are also to be found in other occupied countries. According to the van Waay’s index, based on the sales of the auction house located in Amsterdam, the Dutch art market experienced a boom of +2300% between 1940 and 1943.[3]

Belgium also experienced a similar situation. Newspapers reported the “abundance of sales”, the “firmness of the Art market” and an “intense activity”[4]

If you had to migrate to America during or after the war and you could do it with an Impressionist painting rolled inside your sleeve, you had guaranteed yourself and your family a new beginning.

Art investment is older than you thinkARTICLES 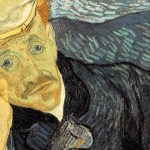 The Asian Crisis of 1987 as Catalyst for Impressionist CollectingARTICLES