It is no surprise that gallery booths at Art Basel are filled with works by artists who performed well in recent evening auctions. What is surprising however is the quick flipping of works by some galleries – a practice that is generally looked down upon by the industry.

When Pace Gallery’s president, Marc Glimcher, declared to ARTNEWS[1] that his gallery has sold 70% of its booth only 4 hours after Art Basel’s doors opened for the VIP First Choice Pass holders, he was at least partially referring to a Calder sculpture sold for $8.5 million which was just been auctioned for $3.9 million at Christie’s New York in November 2017. This was not an isolated case. Helly Nahmad Gallery flipped yet another Calder mobile titled Red Sumac for $5.8 million, which was even more recently sold for $4.1 million at Sotheby’s in November of 2018.

This begs the question, how can a Calder mobile appreciate in value by more than 50% in less than 1 year? What effect do the almost Machiavellian actions of megadealers in the 50th edition of Art Basel have on the art market?

The case of the two flipped Calders bucks two standard rules of thumb for experienced market players. The first is that the growth of online auction databases should provide a Fair Market Value comp set for collectors, thus stabilizing prices, making it harder to flip them for big profits. Second, a work’s ‘freshness’ to market (or rarity) is one of the biggest motivations for buyers to make large investments in a piece. But the examples cited previously break this archetype. This effect can be adjudicated for various reasons:

In a recessionary atmosphere, it is not unusual to see the offering of quality art available shrink. A recession leads to a contraction in the (uppermost) art market supply and thus to the preservation of works’ value when the owners of top-quality works hold on to their pieces out of emotional attachment, as well as fear of selling too cheap. Therefore, during recessionary atmospheres, it becomes harder for intermediaries to find pieces for sale; particularly in the “A+” segment, where the appetite of sophisticated buyers remains strong throughout the various market cycles.

At Art Basel 2019, David Zwirner’s sales of blue chip works included a 1966 painting by Gerhard Richter for $20 million. This Gallery also parted with, Kerry James Marshall’s Laundry Man (2019) for $3.5 million, and a large 1967 painting by Joan Mitchell for more than $6 million, which overall, it signalled that buyers are looking for consolidated works.[6] Zwirner’s further success with its off-site sales includes a Yayoi Kusama’s Pumpkin (2015) for $2 million and a Donald Judd stack from 1991 for $900,000 presold from its online portal. This further indicates that there is a glut of buyers looking to move capital into market-tested works.[7] In Artemundi, we avoid investing in these ‘speculated artists’; instead, we focus on investing in consolidated “blue-chip” artists whose prices have proved to transcend trends and temporary influxes.

The art fair model has mutated since its origins in 1970 when Ernst Beyeler, a dealer and collector, and gallerists Trudl Bruckner and Balz Hilt, started out Art Basel as an experimental initiative. In its first two decades, visitors could still be surprised by impromptu interventions of activists and performing artists on the fair’s sidelines.

By the 1990s, the fair had consolidated as a privileged venue for gallerists and the moneyed mainstream collectors prompting smaller and younger galleries to band together to create some off-site spaces around the exhibition grounds, projects that would later become the like Liste & Volta fairs. Now, after 20 years, these satellite fairs are also part of the market establishment.

Whatever sales strategies were used by the galleries to tempt their clients into expanding their collections Art Basel’s results this year are striking. They signal a strengthening at the top-level of the art market, and further secure Basel’s position as the world’s art mecca.

Will the May Auctions Prove a “Stella” Showing?Transparency 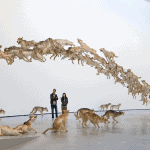